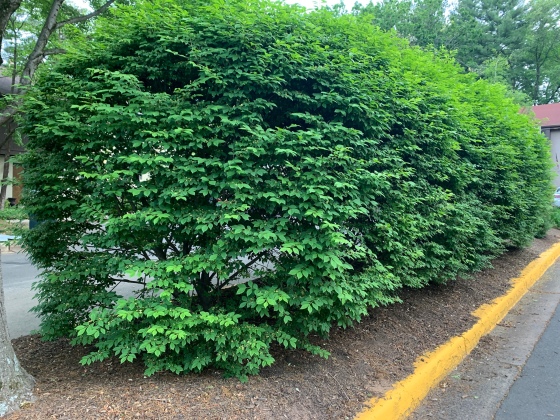 But then autumn comes… 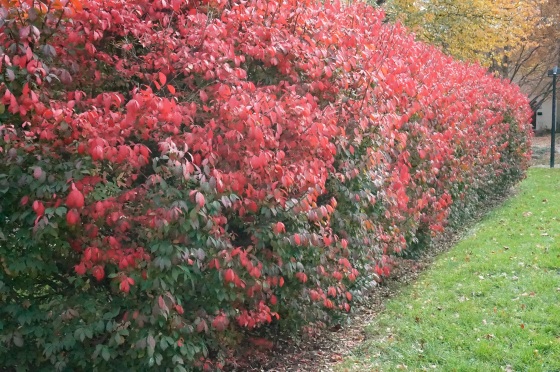 This plant is HOT for gardeners who want showy fall color. The name…get it? And yes, the birds do eat the berries produced by those tiny flowers…and spread them.

This entire patch of forest has an understory of only Burning Bush. For a while, plant enthusiasts planted Burning Bush extensively, not realizing how invasive this native from Asia is. In fact, a number of different Euonymus plants are now spreading in North America. Please learn to recognize the young plants and remove them.

Unfortunately, we have not reached the end of invasive species. There are many more. Know what plants you are buying at nurseries or being offered by well-meaning friends. If something grows ‘incredibly well here,’ then that’s suspicious. Look the plant up online. Check several sources. (One we checked for Bush Honeysuckle made no mention of it being invasive or that it’s on numerous ‘prohibited to plant’ lists.) Check local arboretums, extensions services and park websites.

Or best, go too www.Invasive.org.

Thanks! We squirrels appreciate you humans keeping nature natural…becasue some of us wildlife are tempted by new berries way too much!

You humans may be enjoying this shrubby honeysuckle’s blooms right now!

The flowers are similar to the vining Japanese Honeysuckle, and Bush Honeysuckle, Loncera sp, is also native to Asia. In our North American woodlands, it is the first shrub to leaf out. It blocks the sunlight from shorter plants, often native wildflowers that ONLY emerge and bloom in the spring. If shaded, they won’t complete their cycle, and the Bush Honeysuckle quickly takes over any sunny location, spreading its woody boughs to 20 feet wide and high. 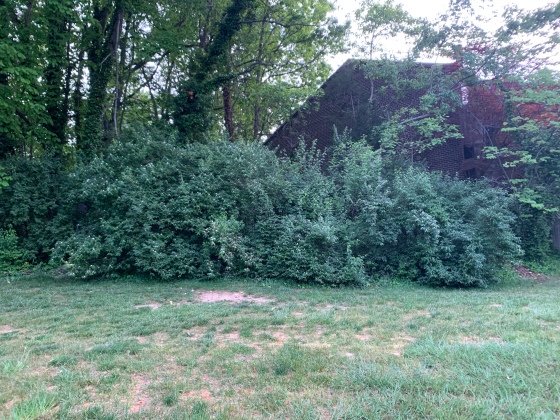 The flowers produce a juicy, red berry that our birds do enjoy…however, take that with a grain of salt, as you humans like to say. This only means that the berries can be spread far and wide, dropping a super-grower throughout the woodlands–or your yards! 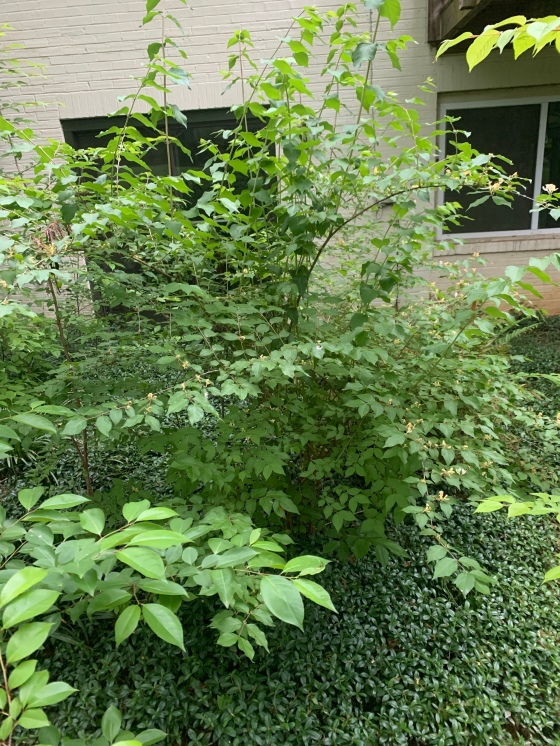 The small sprouts are putting more energy into their leaves than roots and seem to come up easily, so put on your detective  hat and learn to identify this invasive.

The simple leaves grow opposite each other. They remind us squirrels more of dogwood leaves than the rounded leaves of vining Japanese Honeysuckle. The classic honeysuckle flowers sprout at the joint of the leaf to the stem, thus in twos, and the bright red berries follow in the same spot.

We don’t have a photo of the berries, but the Missouri Department of Conservation has excellent photos on their Bush Honeysuckle page.

Bet you folks didn’t think this old squirrel would have an invasive plant on his Thirsty Thursday. But Nutmeg made sure I found a water-loving one. There are many, Water Hyacinth and Purple Loosestrife are others, but we’ll focus today on Yellow Iris, Iris pseudacorus.

You humans may think this is like any other iris you plant in your yard. The pretty flower looks the same, and blooms at the sometime, May-June. The leaves look the same, though can grow taller and be mistake for cattail leaves. But this iris, also known as Yellow Water Iris and Yellow Flag, likes its roots in water.

Oh, it likes its roots in water! And it doesn’t behave the same as in its native homes of Europe and parts of Asia and Africa.

Yellow Iris produces seeds, but it’s the aggressive rhizomes on this iris that allow it to spread far and fast. The dense mats they form quickly crowd out other water plants. No native plants survive once Yellow Iris gets a hod of a pond.

Do you know what they means for the insects living there? For the ducks looking for a few tasty roots. You got it, water desert.

Steer clear of this one, folks!

For our second invasive plant that humans grow on purpose, we’ve chosen English Ivy, Hedera helix. As you may guess from the name, English or common ivy is originally from Europe. Many plants and animals were introduced to the New World because colonists either used them for a medicinal or food purposes, or couldn’t imagine living without them.

English Ivy did have medicinal value, all the way back to the times of Hippocrates and the ancient Greeks. We squirrels are not recommending these treatments. We are simply stating that early peoples found uses for the plant and wanted to continue those uses, such as preventing intoxication, reducing swelling, and as an anesthetic.

Also, from a gardeners’ perspective, English Ivy will grow in shade, requires little care and will spreads by root runners and by seed. Again, now we know these habits are detrimental to the health of our native plants. 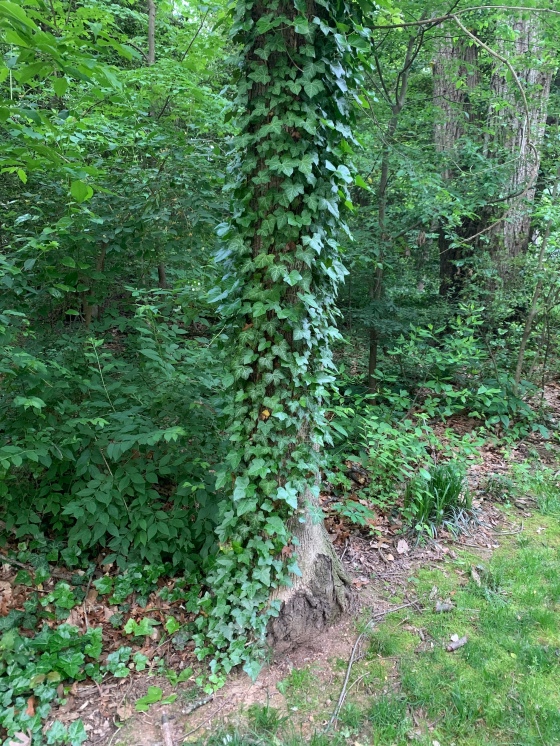 Interestingly, English Ivy only flowers when it has upright shoots, such as traveling up a tree or building. It does damage both when doing this, by sending its roots under bark and into masonry, allowing water and fungus to grow.

Thus, we recommend that you remove the ivy from your trees and buildings first. Cut the vines without cutting the tree bark to prevent harm to trees. The humans we squirrels have been observing in our neighborhood used a tool, like a screwdriver, to lever up the vines to cut them. They then remove the vine from the base of the tree to ensure they got all of them and often cut back a circle of vegetation.

The plant will die on the tree and soon will be brittle enough to break off.

Hickory and I are doing our part by running up and down the trunks to loosen it so it falls faster. Pass the word to your squirrel friends in your neighborhoods!

When removing the vines from the ground, it’s best to wait until after a recent rain so the soil is wet and giving. Then you humans have the best chance of having the roots come up with the vine. Any piece of root left in the ground will sprout anew. Sorry, but you might be removing for several years to come, but it should become less and less.

Be sure to replace the ivy with native plants–plenty of them thrive in the shade. But that’s a story for another post! 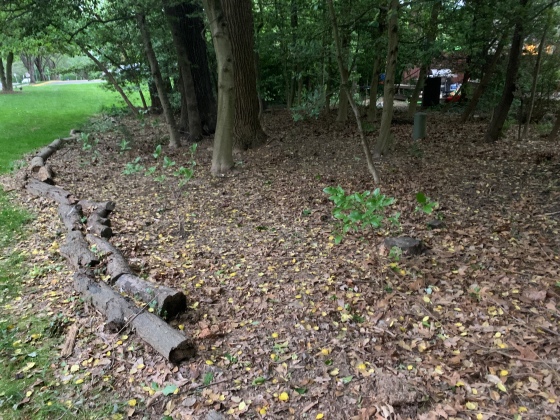 “The acorns are falling!” Hickory leaps back and forth under the huge Chestnut Oaks in our neighborhood. “This will make it so much easier to collect and bury them! And snack on.”

“Ugh, they’re green,” I tell him. “These are only good for burying.”

“Well, look on the bright side. The humans have done something funny to the grass, so we won’t need to dig holes. Just push them in.”

Now both our tails are flicking as we get to work.

Nutmeg advised you human readers to leave your flower seedbeds for the birds, but here’s a plant you should clean up.

Know what it is and why?

Make your guesses and I’ll return later with the answers.

Hmm, here’s a vine you humans ought to become more familiar with–because it’s terribly invasive! You’ll want to get rid of Mile-a-Minute Weed the second you see it.

The triangular leaves and barbed stems are a great way to identify it, even if you don’t notice that the vine is growing 6 inches a day. Yes, it can take over quickly, and we squirrels beg you to keep this from happening! We like our native foods better, though some deer, chipmunks, mice and birds will eat them. Of course, that’s another way the Mile-a-Minute Weed is spreading.

Did you notice some of the leaves have holes in them? That’s because some great humans have released a weevil that eats Mile-a-Minute Weed leaves, then lays its eggs in the stems. The larvae eat the plant from the inside. Read more about Mile-a-Minute Weed and this weevil on this New York Invasive Species Information bulletin. 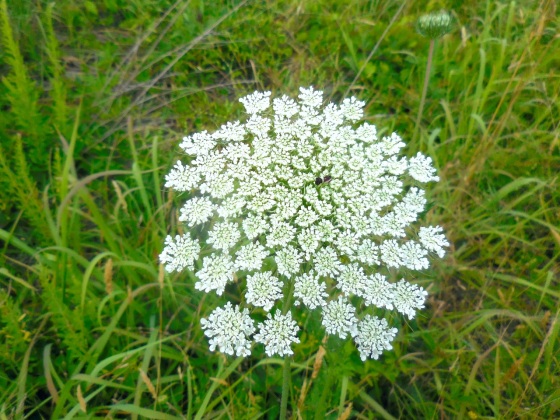 Apparently Queen Anne’s Lace can! Looking good out in those fields.

A human reader mentioned watching out for invasive species in the comments of our Ox-eye Daisy post last week. Plants like Ox-eye Daisy and Queen Anne’s Lace that became naturalized in our fields decades ago aren’t as big of a threat to nature as new plants that are taking over. One of the worst is Mile-a-Minute Weed, Persicaria perfoliata.

The leaves are quite distinctive–a triangle. Note the barbs on the stem. Nothing else looks like Mile-A-Minute Weed.

While it may not really travel a mile in a minute, this vigorous vine can grow six inches in a day and will smother wildflower and  shrubs.

That should be enough to convince you to pull those little triangular leaves any time, any place you see them. If you need to know more, here’s the New York Invasive Species information on Mile-A-Minute. Good photos!

All this rain we’ve had has the streams running high here in northern Virginia and the ponds full. This old squirrel has stayed clear of them for fear of being washed away. Same for the roads–but because you humans can’t see a gray squirrel when it’s raining. Besides, who wants wet fur?

The rain has been good for the plants. Our suburban neighborhood is fully green and it seems we’ve moved to the early summer flowers. Because it’s Thursday, we can enjoy pond flowers today!

Unfortunately, not native ones.

Yellow Water Iris has naturalized in North America, but is an invasive plant that some feel is becoming a little too common. Humans like it, plant it and any bit of broken roots spread the plant. We read a good suggestion: only plant this iris in closed garden ponds, not streams, canals or open waterways where the plant roots and seeds can be carried downstream and spread.

So, it’s spring, and we squirrels are reveling in the warmth and color of nature. We see you humans enjoying it, too! One of the plants you may see in your neighborhoods is Japanese Honeysuckle, Lonicera japonica.

This vine isn’t native to North America, but certainly has made itself at home…in fact, it’s ousted many of our native plants from their homes! The semi-evergreen honeysuckle is invasive, and covers over the ground, then native shrubs and trees in its efforts to spread. The flowers may smell fabulous, and provide some cover for birds, but not even the most agile squirrel can get through it’s tangles. Please consider removing Japanese Honeysuckle. It only needs a bit of toe-hold in the yard to take over.

Here’s a good National Park Service fact sheet with more descriptions and how to manage this invasive plant.

In past years during the Blogging A to Z Challenge we’ve featured native wildflowers. If you’d like to see those–Jewelweed and Jack-in-the-Pulpit–just go over to our search bar and type in ‘J is for’ and they should all pop up for you. You can do that for any of our alphabet posts.

Hi, I'm Nutmeg and I love living, working and playing in Reston, Virginia. Join me and my squirrel correspondents as we explore the plants and animals in our backyard habitat.

In April, we’re blogging with:

What we're chattering about.

danger food Food from People home human activities invasive plants Motionless Monday other animals people doing stuff to help us plants that are not food plants that like their feet wet pond Thirsty Thursday Uncategorized water What is it?

Ways to get from here to there

All text and images © The Squirrel Nutwork 2012-2020. Unauthorized use and/or duplication of this material without express and written permission from this blog’s author and/or owner is strictly prohibited. Excerpts and links may be used, provided that full and clear credit is given to The Squirrel Nutwork with appropriate and specific direction to the original content. View our Privacy Policy.